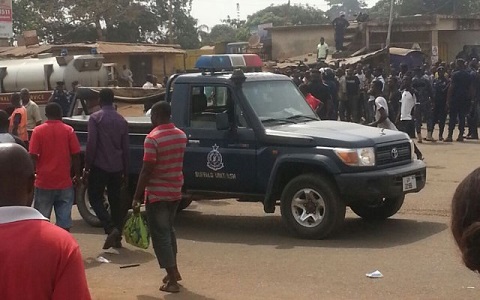 Fresh charges have been preferred against suspects allegedly involved in the Bimbilla clashes which resulted in fatalities and destruction of properties.

Meanwhile, one more person had been arrested and arraigned.

The accused persons are Mohammed Kadri, a Casual worker, Sulemana Mohammed Sheriff, a Store Keeper and Yakubu Zubieru, a Tractor Operator and Iddi Abudulai aka Sam, an electrician.

They have been charged with conspiracy to commit a crime to wit murder and three counts of murder.

Their pleas have not been taken.

The court presided over by Mr. Ebenezer Kweku Ansah refused to grant bail and urged defence counsel, Mr Abu Juan who represented the accused to go further if he wants to secure bail for the accused.

The court urged the Police to secure autopsy reports of the deceased.

The case as presented by prosecution was that the accused persons are natives of Bimbilla in the Northern Region.

According to the prosecutor after the death of Naa Abariga, the overlord of the Nanumba Traditional Area in 2003, there had been series of clashes in the area resulting in several deaths.

Prosecution said on February 9, this year, the regent of Bimbilla was enskinned as a Warrior Chief but after the ceremony, the three accused persons together with others, now at large armed themselves with offensive weapons and petrol and set 21 houses ablaze.

According to prosecution, they also attacked the household of the three deceased, namely Nangtomah Awadu, Taiba Alhassan and Mariam Mohammed.

Prosecution said Awabu and Taiba who were fired at, died instantly. Mariam who also sustained gunshot wounds was rushed to the Bimbilla Government Hospital where she was admitted but died the following day after being referred to the Tamale Teaching Hospital.

The prosecution said the accused persons were “positively identified” by witnesses by a combined team of Police and Military personnel stationed at Bimbilla and brought to the Criminal Investigation Department headquarters.

Prosecution however mentioned that the deceased have since been buried and the Police have not yet to receive their autopsy reports. 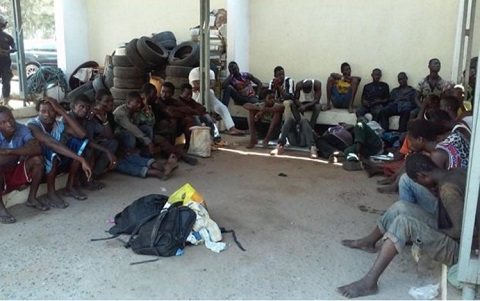 The Effiduase District police in Koforidua, the Eastern Regional capital, has arrested 23 suspects, including a female, believed to be linked to various crimes in the New Juaben municipality.

The Commander, DSP Daniel Yaro, briefing DAILY GUIDE, said the suspects were arrested during a swoop at Oyoko, Effiduase and Zongo areas at dawn on Tuesday. Items retrieved from the suspects were substances suspected to be narcotic drugs, according to the police officer.

The police chief said the exercise formed part of measures rolled out to clamp down on criminals and miscreants who allegedly engage in all forms of criminal activities.

DSP Yaro indicated further that on February 2, 2017, his outfit managed to arrest four suspects in the persons of Devine Modzaka, 27, a phone repairer; Edward Nketia, 20, driver; Isaac Gariba and Daniel Bekoe in connection with a robbery attack in a house located at Asokorekuma.

The suspects are currently being tried for conspiracy to commit crime, robbery and dishonestly receiving, at the Koforidua circuit court. Sitting has been adjourned until March 8, 2017. 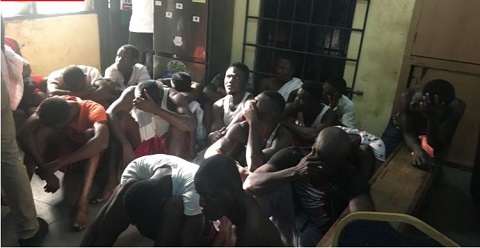 34 arrested for looting shops at Nungua

Thirty-four persons have been arrested by the police for allegedly looting shops and violently attacking some shop owners in the Nungua Traditional Area.

According to the purported looters, their victims allegedly did not adhere to the curfew imposed on the area by the traditional authorities.

Movements of residents in the Traditional Area in Accra were restricted from Thursday, March 2 as part of funeral arrangements for the high priest of the Ga-Dangme State, Gborbu Wulomor, Wor-lomor Borketey Larweh-Tsuru I.

But some residents and shop owners were said to be unaware of the directive and so opened their shops.

The Police Service had indicated that the Nungua Traditional Council had rescinded its decision to impose a curfew on the Nungua township and its environs.

The police, in a statement said, “After a thorough dialogue between the police and the Nungua Traditional authorities, the Traditional Council has rescinded its earlier decision to restrict movements of persons, vehicles and commercial activities during the period.”

The suspects are alleged to have coerced some business owners to comply with the directive by the Council as part of the traditional burial rites of the Wulomor.

They were alleged to have looted and stolen some items from scores of shops in the area, leading to their arrests by the police.

The Council told Citi fm that only some critical institutions such as hospitals and the Electricity Company of Ghana were allowed to operate within the period.

While some complied with the curfew order, others reportedly ignored it. But commercial entities like the ADB Bank, Ghana Commercial Bank and other financial institutions closed their doors to the public as a result of the ban.

Use this form to find things you need on this site

Questions, issues or concerns? I'd love to help you!